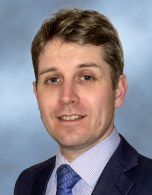 Dr Ed Breeze grew up in Nottingham, but made the journey down the M1 to study at Bart’s and the London School of Medicine, where he qualified in 2003.

His anaesthetic training was in the North-East London area. This training began at Broomfield Hospital, Chelmsford in 2004 as an SHO, where he would later return to work as a Consultant.

Ed has a particular interest in regional anaesthesia, as well as anaesthesia for the high-risk patient. This led him to complete a fellowship in Cardiac Anaesthesia and Intensive Care at Papworth Hospital, caring for cardiac, thoracic and transplant patients.

He completed his training at the St Andrew’s Centre for Plastic Surgery and Burns in Broomfield Hospital, where he later began work as a Consultant Anaesthetist in 2012.

Regular anaesthetic lists cover a broad range of specialities including plastic and breast surgery, hand surgery, head & neck surgery as well as gynaecological and orthopaedic trauma surgery. He therefore cares for patients of all ages, both with and without previous or ongoing health problems.

Outside of work he is kept on the straight and narrow by his wife Kirsty, and enjoys running, golf and curry, trying to do more of the former than the latter!

Dr Breeze was last revalidated by the GMC in November, 2020